It seems that every time I really know something about an issue, and I find a media story about that issue, I am absolutely amazed just how wrong the media can be.  Or at least in the case of Wall Street Journal writer Damian Paletta, how true facts can be twisted to create an inaccurate conclusion. I have seen several comments on the internet indicating just such an effect in which readers think that this article proves that the Obama administration is playing politics with the social security disability program and purposely slowing down disability claims (though it is not clear why a work “slowdown” at Social Security would be in anyone’s political interest). 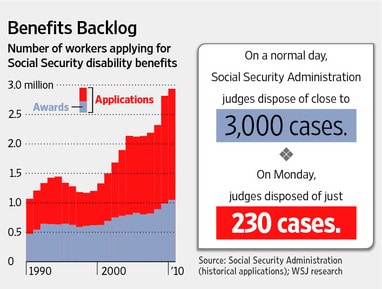 This article can be found at http://online.wsj.com/article/SB10001424052970203405504576601243696313416.html.  It is not particularly well written, but apparently these are the facts.  The Office of Disability Adjudication & Reviews (ODARS) handles administrative hearings on social security disability claims.  Due to an ODARS fiscal calendar “anomoly” this year, there was one week that did not “count” in either fiscal year 2010 or fiscal year 2011.  Therefore, cases closed (i.e., case decided and sent out the door) in that week could not be a part of the determination of whether ODARS did or did not meet their goals for the fiscal year.  So ODARS would not get “credit” for cases closed in this “dead week”.  The article implies that ODARS personnel “bonuses” are determined by these case disposition numbers.  I know of no bonuses paid at ODARS at all.

Apparantly ODARS administrative law judges in some regions were instructed to not close out cases during this “dead week”.  No such instructions were alleged to have been issued in “Region 5” that includes 3 Dallas Fort Worth ODARS offices.   In an apparent response to word getting out to the public about these instructions,  ODARS chief judge Debra Bice sent a memo to all judges ordering them to close cases as normal.

The right hand side of above infographic comes from the WSJ article compares ODARS average daily case closings with the first day of the week this year that was “fiscally dead”.

The clear implication of the WSJ article, and the “guilty behavior” of the ODARS’ chief judge, suggests that social security disability claimants are being mistreated, and that government bureacrats had a free week off.  One can just almost hear the giddy whoops of the “Angry Birds” echoing down the halls of ODARS as government workers idlely entertain themselves on the clock. As a Dallas Fort Worth Texas social security disability attorney of 20 years experience, I certainly have seen ODARS mishandle many situations, but the allegations of this article are a bum rap.

Consider that at any one time an Administrative Law Judge has 100+ cases – all at different “stages” of development.  There are some cases in which she has to review the file before setting it for hearing, others she has new medical evidence that has been submitted that she has to review, other cases she has not yet decided the case, and others she has decided and has not written the decision yet.  So if she is instructed to not “close” cases for one week, do you think she is just sitting around that week?  Of course not!  She will turn her attention to any number of tasks that will lead to decisions getting out the door.  Isn’t it just common sense that she would simply make a nice neat pile of the cases that ready to be “closed” until the next week?  So that the next week “two weeks worth” of cases get out the door.  “Closing” cases is just part of the job: the fact that for one week cases are not to be closed is hardly a noteworth event.

The worst that could have happened when ODARS suspends case closing for one week is that some claimants got their decision a week later than they would have.  And the infographic above showing this massive decrease in case closing seems designed to intentionally to inflame, if not mislead, the reader.   Wall Street Journalist Damian Paletta: was this article of yours really worth the ink you spilled?