Social Security Disability Benefits by Diagnosis: What Do the Changes Mean? 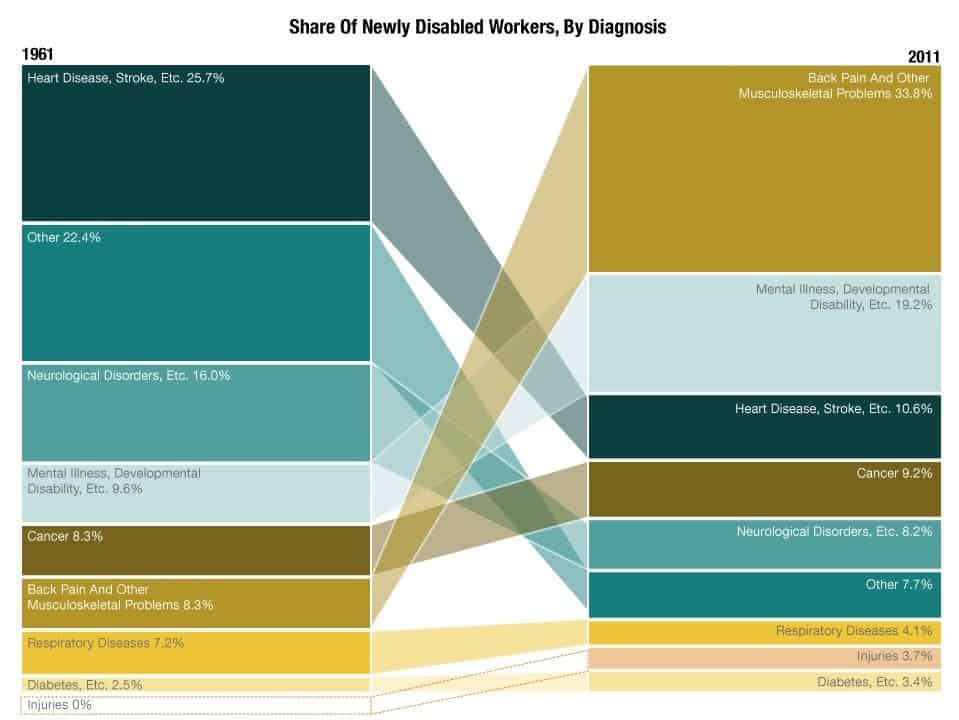 NPR’s “Planet Money” published a dramatic and concerning report titled “UNFIT FOR WORK: The startling rise of disability in America”. The article followed the stories of several social security disability applicants, focused on states such as West Virginia and Alabama with high numbers on disability, and presented a wealth of interesting and thought provoking statistics.  I would like to focus on one set of statistics: the contrast of disability approvals based on diagnosis from 1961 and 2001.

The chart presenting this statistic in the NPR article is reproduced above.  Its a little hard to read, I know.  You have to follow the diagnosis from the left column representing 1991 disability approvals to the column corresponding to the given diagnosis in the right column for 2011.  These are national statistics: there are none available for Texas.  But the changes are dramatic:

So why was there a big increase in disability approvals for bad backs and mental problems?  What accounts for these changes?  A thresold questions has to be this: has the frequency and severity of back pain and mental illness increases in the United States over the last 50 years? Its reasonable to assume that medical treatment for all conditions -include back pain and mental problems – has progressed.  The decreased percentage of disability approvals in the Heart Disease/Stroke category surely represent medical progress in those areas.  So the increase in back pain and mental illness disability is puzzling.  Let’s look at each diagnosis category to see if there are answers.

In general, our work lives as a nation have moved toward sedentary, computer-dominated settings.  We should expect there are fewer Americans in jobs where severe back injuries may take place: farming, manual labor, etc.  On the other hand, it is true that sedentary work and life style may not result in dramatic back injuries, but this lifestyle certainly contributes to chronic back pain issues.  We all know that demographically the United States is older.  Chronic back problems, of course, increase with age. So perhaps sedentary work settings and an aging population contributes, if not fully expains, the increase in disability approvals based upon back impairments.

As indicated in the above chart, disability from mental problems has gone from under 10% to nearly 20% of disabilities.  Is the United States suffering a mental health epidemic?  The reasonable assumption noted above that health care, in general, has progressed for all medical condition is particularly true for mental illness: the time period of 1961 to 2011 included dramatic improvements in mental health care, most prominently with the arrival of new classes of medications for depression and anxiety.  Shouldn’t we as a nation be less “disabled: due to mental illness?

To be fair to Forbes and Fox News, this allegation is also made in the NPR “Unfit to Work” article, though in a less partisan manner: NPR’s article suggests unemployment has driven disability applications.

The view from the  “disability-industrial complex”

I used the pejorative term used by Forbes magazine in referring to social security disability attorneys, agencies and corporate disability representation firms for dramatic effect. I do not agree with that dismissive term.  After all, I guess I am a part of that complex!  In an “Open Letter” to NPR in response to the “Unfit to Work” story, former commissioners of the Social Security Administration explained increases in the number of Americans on disability Increases are mostly the result of two factors: “baby boomers entering their high-disability years, and women entering the workforce in large numbers in the 1970s and 1980s so that more are now “insured” for DI based on their own prior contributions”.  In a word, “demographics”.

But do demographics explain the increase in mental illness based disability claims?  Are older people more susceptible to mental illness?  The below chart from the National Institute of Mental Health (NIMH) would say no, in fact, mental illness is less prevalent in older Americans. 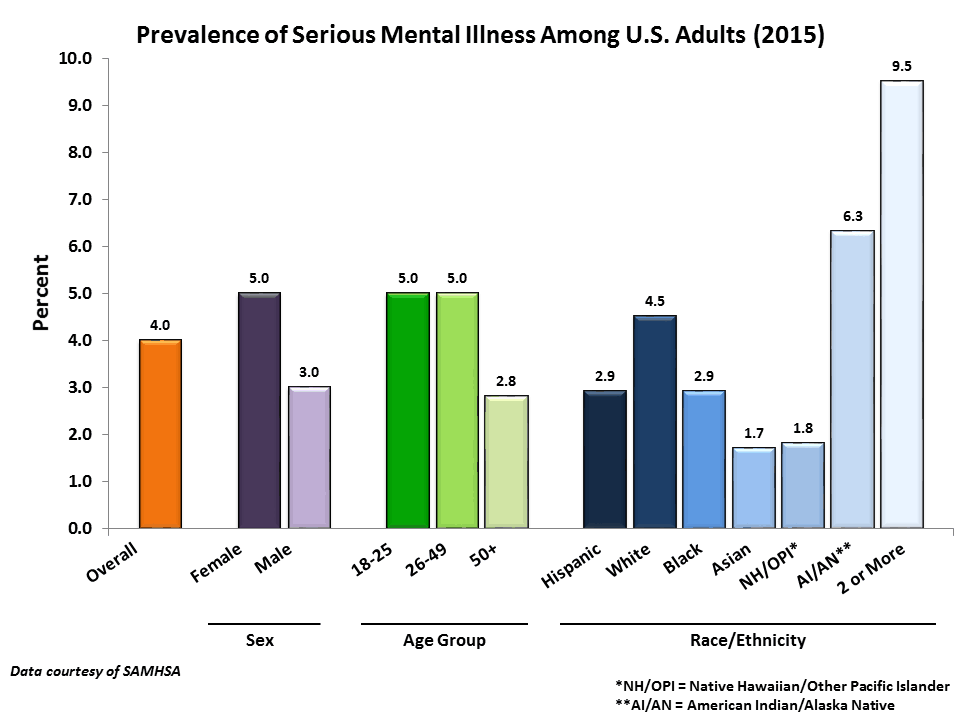 Of particular note is the fact that social security disability regulations were radically overhauled during the Reagan Administration via the Social Security Disability Benefits Reform Act of 1984. This law specifically directed the social security administration to do a better job in assessing mental disabilities in response to multiple federal court decisions critical of social security’s high denial rates for mental illness disability.

In sum, I think I have made a good case for the “disability-industrial complex”: demographics can explain back pain disability claim increases, and better mental health assessment by social security explains increases in mental illness claims.